ENG 簡 繁
A A A
Hong Kong Port 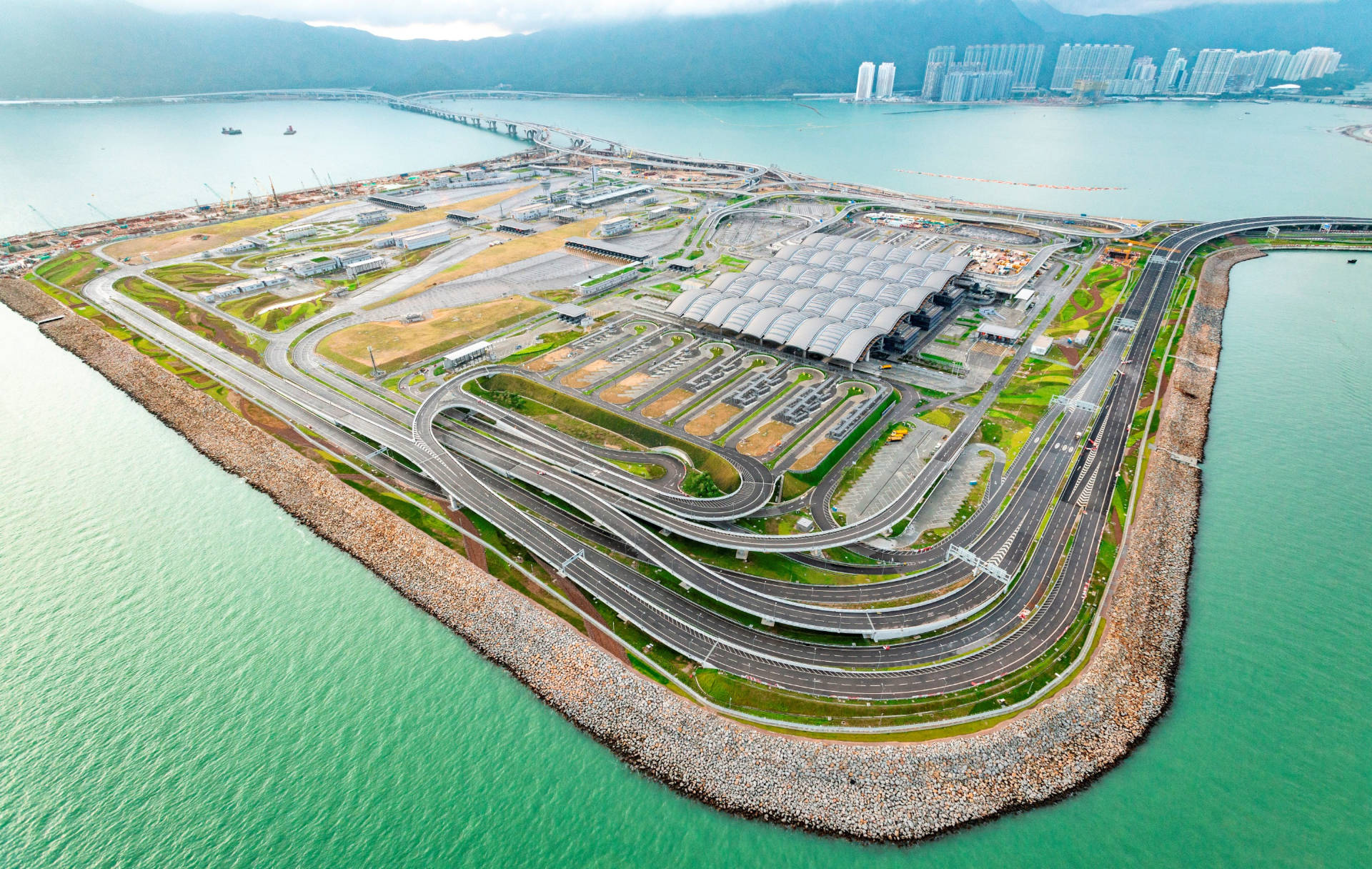 With a total floor area of over 90,000 square metres and a wavy roof designed to simulate undulating waves, the PCB is an iconic building standing at the Hong Kong Port. The roof is supported by tree-like structural columns to create an enhanced sense of spaciousness in the arrival and departure halls. 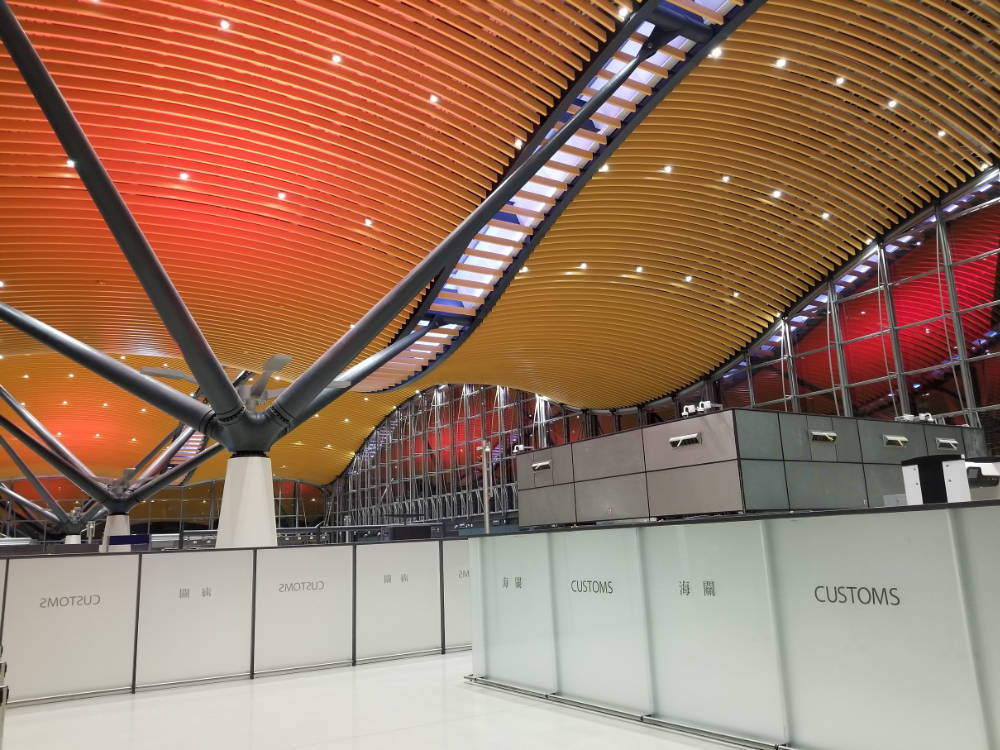 Due to the fact that the PCB is close to Hong Kong International Airport, one of the busiest airports in the world, various difficulties and challenges were encountered at different design and construction stages. The airport height restrictions imposed severe constraints on the design of the PCB, and significantly impacted on the construction methods and constructional plant that could be deployed for the works. To tackle the challenge of the airport height restrictions, the engineering team adopted an innovative construction method to construct the PCB roof. 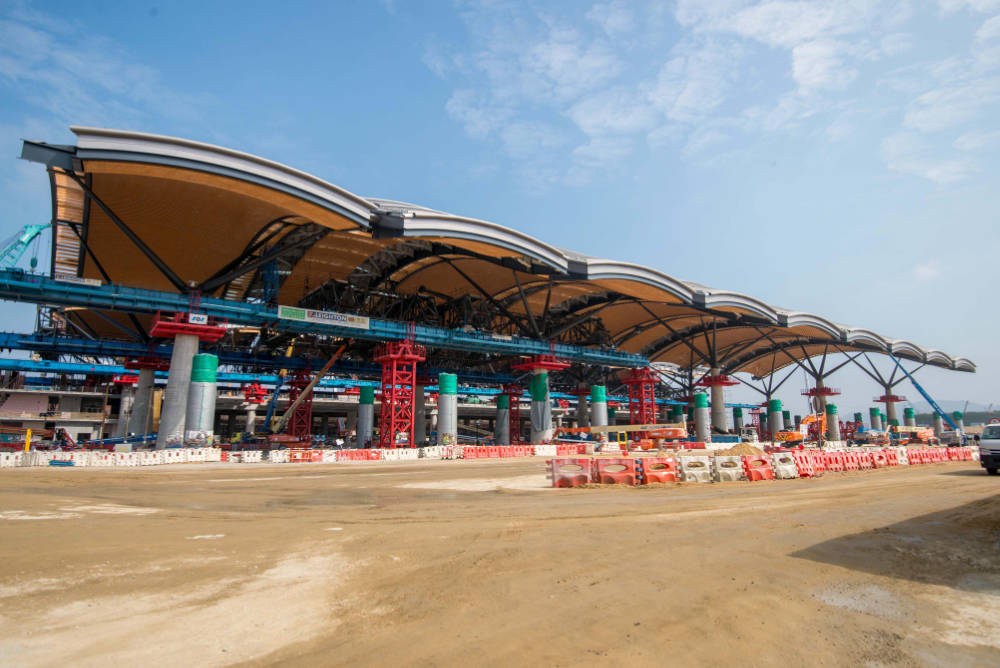 The roof of the PCB is a highlight of the Hong Kong Port construction works demonstrating full utilisation of innovative construction methods. The project team adopted the prefabricated modules assembly method, an innovative method rarely used in roof construction, for building the roof. Large-scale prefabricated modules were lifted up one by one, pushed into position horizontally and connected together. Problems posed by the huge size and weight of the modules as well as the airport height restrictions were overcome. The method also helped achieve faster construction progress, enhance the quality of works and reduce the risk of working at height. 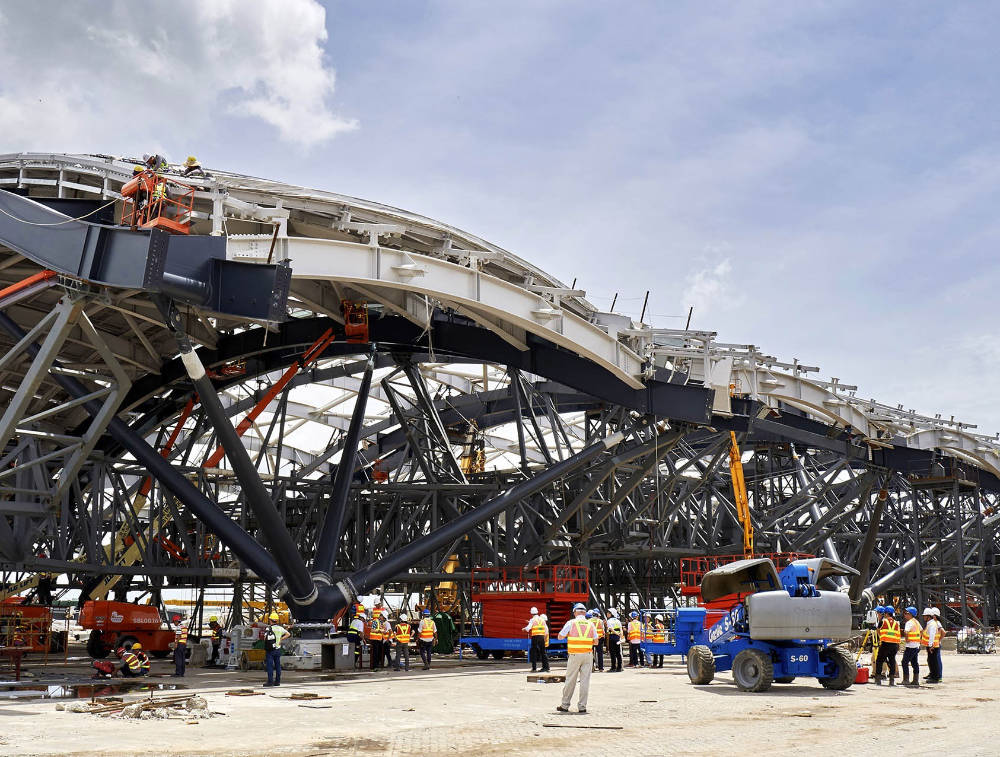 The roof is formed by 45 large-scale prefabricated modules. The area of the largest roof module is approximately 60m(long) x 25m(wide) with weight of approximately 670 tonnes, which is larger than a standard Olympic-size swimming pool. Different from ordinary prefabricated modules, the roof modules were composed of not only the structural steel frame but also the pre-installed building services as well as architectural builder works and finishes, such as aluminium cladding, skylights, smoke vents, drainage, baffle ceilings and the lighting system. Most works for these large-scale prefabrication modules were completed at prefabrication yards, thus saving on-site construction time. 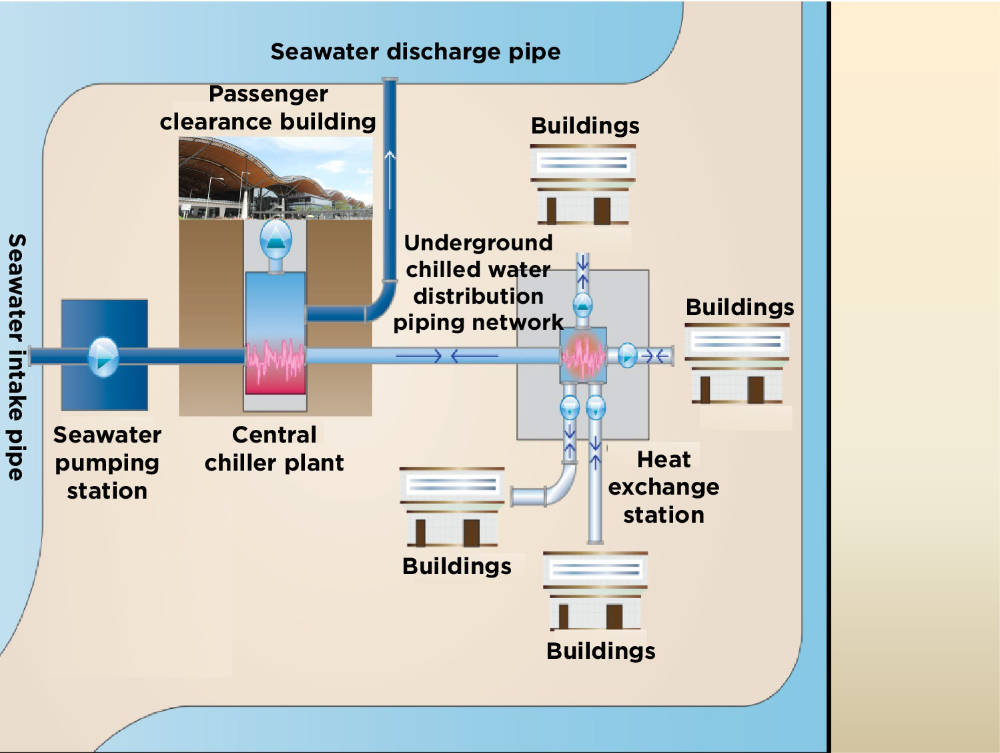 The District Cooling System (DCS) installed at the Hong Kong Port distributes cooling capacity in the form of chilled water from a central source located at the basement of the Passenger Clearance Building to various buildings at the Port through a network of underground pipes. Individual chiller plants are not required. 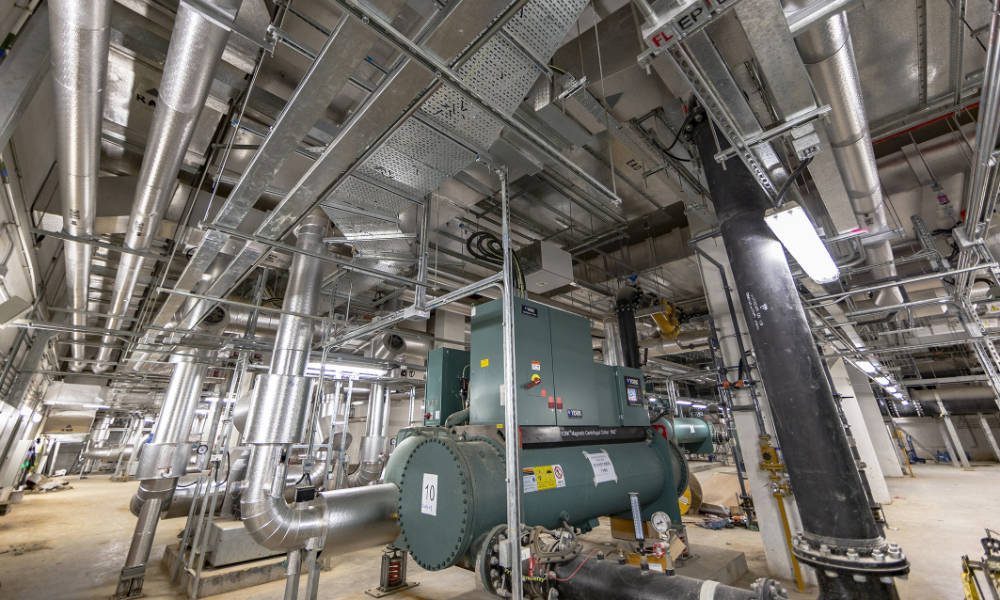 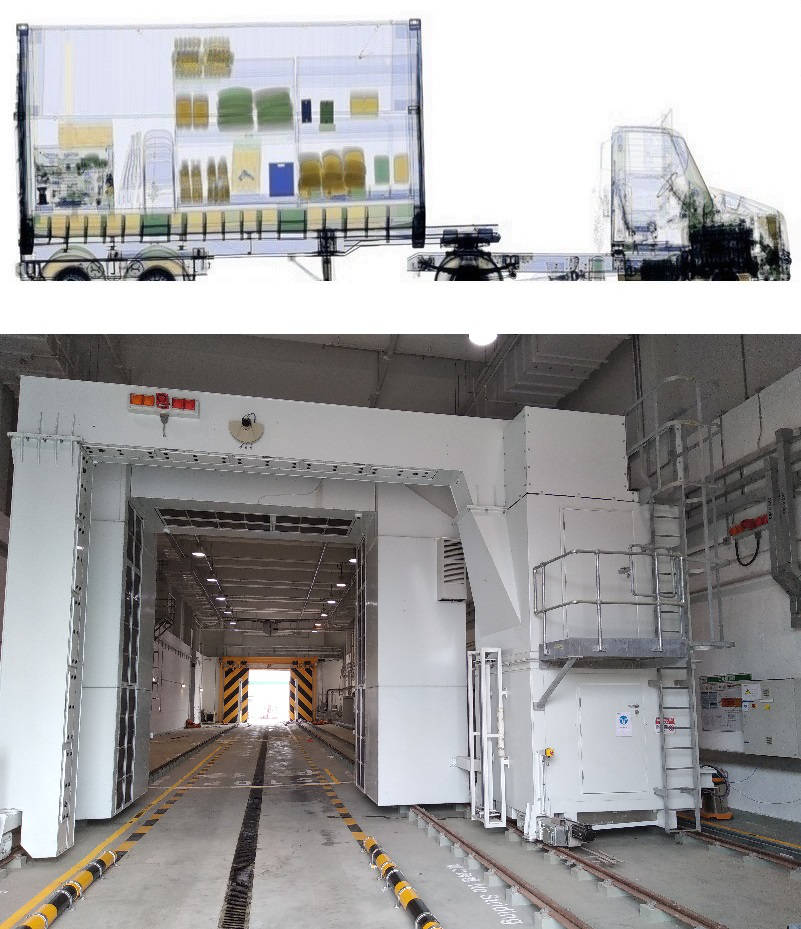 HZMB HKP has 2 vehicle X-ray inspection buildings. Each of the buildings is equipped with an advanced vehicle X-ray inspection system to strengthen the enforcement capability of Customs and Excise Department. The vehicle X-ray inspection system adopts a gantry type design which is the first of its kind in Hong Kong. The system can handle 2 45-foot long cargo containers at the same time in a single inspection achieving a maximum hourly throughput of 20 container trucks. Applying the dual energy transmission X-ray technology and backscatter X- ray technology to inspect vehicles and cargoes, the system can instantly and clearly reveal details of the goods inside the container by showing the goods in different colors according to their physical properties and thus able to discover unmanifested consignment hidden in a false compartment of the vehicle. The system will not only enhance the efficiency of cargo clearance significantly, but also increase the accuracy of inspection, hence strengthening the capability in combating smuggling activities to a large extent.